María José‚ Ferrada is the author of Mexique: A Refugee Story from the Spanish Civil War (Eerdmans). She is a recipient of the Municipal Prize of Literature of Santiago, as well as the Academy Award from the Chilean Academy of Language. María currently works as the children’s editor of Chilean Memory, a digital resource center of the National Library of Chile.

What motivated you to become an author?

From a very young age, I liked to write and read. I was one of those girls who enjoyed doing language class (not so much with math), so I could say that I recognized my vocation at a very early age. But my only brother—15 years younger—had to be born so that I, trying to make him a gift, would start writing poems and stories for children. I really liked writing books for children,—because it still seems like a place from which you can write with great freedom. Also, every time I write a story or a poem for children, I also become a little girl again.

What are you most passionate about in this job?

I love being able to talk with the boys and girls I visit in schools. I learn a lot from the way they see the world, without the prejudices that we adults have, as if they were seeing it for the first time.

Where do the ideas for your books come from?

Sometimes memories of my own childhood. Other ideas come from things that boys and girls tell me. I take their concerns seriously: the importance of friendship, love for animals, among many other things. I also observe how they analyze reality, how they interpret the news they hear—and that it is not always the way we would like. Sometimes, because they are children, we do not give them the opportunity to express their opinion about what is happening in the world. It turns out that, when we do, we find that they have very deep and sensitive opinions on important issues, which affect not only them but everyone.

How much research do you do before starting a book?

There are books that require bibliographic research, doing interviews, watching documentaries (as in the case of Mexique and Niños, which will also be published by Eerdmans), and there are other books that require an observation of one’s own memories and history. Most of the time, it is a mixture of the two. You pause on a topic because there is something in your own story that makes you sensitive to that topic, and not to another. In my case, I think that from talking to children so much I have become more sensitive to everything that involves them.

Can you tell us something that people don’t know about you?

Perhaps people do not know that I am passionate about Japan and that, every time I can, I travel to that country (which is very far from mine). I have a Master’s degree in Asian and Pacific Studies from the University of Barcelona. I also tried to learn the language, but the truth is that I’ve tried without much success.

What has been the highlight of your career so far?

I think it was very important for me to write Niños, dedicated to the children who were detained, disappeared, and executed during the Chilean dictatorship. I think that book taught me that it is possible to write for boys and girls about painful topics and that not only adults need literature to reflect on our society. Children also have that need and books can accompany them in that journey.

Tell us about Mexique. What inspired you to write this book?

It was the editor of Alboroto, Mónica Bergna, who, upon learning about Niños, asked me to write about the history of this group of children who also suffered political violence, exile in this specific case. I was struck by how little the story was known outside of Mexico, so it seemed to me that it was a project that had to be done: tell the story so that we can work together and never again will a ship with boys and girls have to escape a war.

What does Mexique represent for you?

For me, the history of Mexique is a symbol of the lack of protection children have in the world we adults have created, a symbol of violent ways of acting that we have naturalized and that we must urgently correct.

What do you hope the children will learn from this book?

I hope they learn that migration is a complex phenomenon. That when a boy or girl arrives in another country, escaping from political violence, many times they carry trauma with them. So the task for those who receive them is to be welcoming and patient, to give them a space so that they slowly and at their own pace can adjust their roots to the new land.

What has been the best reaction from your readers so far?

I remember we read the book at a Catalan school, and the boys and girls  were amazed by the fact that there was a time when they were the migrants. There were also migrants in the class, who commented on the difficulties and the good things they had encountered. I think it was a moment when everyone felt confident  talking about it. That is the objective of these books: to know the experience of the other and to ask ourselves what role we play in that experience. 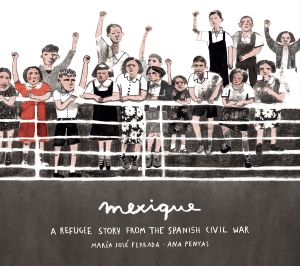 On May 27, 1937, over four hundred children sailed for Morelia, Mexico, fleeing the violence of the Spanish Civil War. Home was no longer safe, and Mexico was welcoming refugees by the thousands. Each child packed a suitcase and boarded the Mexique, expecting to return home in a few months. This was just a short trip, an extra-long summer vacation, they thought. But the war did not end in a few months, and the children stayed, waiting and wondering, in Mexico. When the war finally ended, a dictator—the Fascist Francisco Franco—ruled Spain. Home was even more dangerous than before.

This moving book invites readers onto the Mexique with the “children of Morelia,” many of whom never returned to Spain during Franco’s almost forty-year regime. Poignant and poetically told, Mexique opens important conversations about hope, resilience, and the lives of displaced people in the past and today.

4 thoughts on “Interview with María José Ferrada, Author of Mexique”