In honor of the American Library Association’s Midwinter Meeting (which begins today in Dallas, Texas), we’re pleased to welcome our first children’s book author/illustrator to EerdWord: Marisabina Russo, whose sweet new picture book Peter Is Just a Baby has just been reviewed by The New York Times. In this post, Russo tells the story behind the book’s creation.

People often ask if I start with words or pictures when I create a picture book. While an image — like the sight of my son’s toy cars lined up across the living room rug — might be the inspiration, I always sit down to write my stories before planning any of the illustrations. And so it never occurred to me as I worked through several drafts of Peter Is Just a Baby that my characters might turn out to be bears!

The idea for Peter Is Just a Baby came to me many years ago when I was attending a first birthday party for a friend’s son. The birthday boy toddled around the yard with his party hat and later got chocolate cake all over his face. When it was time to open his presents, his big sister sat with him to help, but she got more and more agitated as the toys piled up. Finally, she stormed off into the house and refused to return to the party. Oh, how hard it is for any child to share the spotlight with a younger sibling! And what could be worse than your little brother’s first birthday party?

In my earliest drafts I focused on the birthday party and the preparations leading up to the big day. I showed the big sister taking charge of all the decisions from party plates to balloon color. Later when the party is in full swing she has a tantrum just like the one I witnessed all those years ago. She is finally cajoled into returning to the festivities when her grandmother asks her to sing a song for the guests — thus giving her the spotlight she craves.

It was an okay story, but it didn’t bring anything new to the age-old sibling rivalry genre. And it wasn’t funny enough. It is always good to picture your characters in other situations: how would they behave? So I started to think about the sister’s love of ballet. That led me to French ballet terms, and I began to imagine how much she would enjoy showing off her knowledge of French.  As soon as I started down this creative path, the story immediately became fresher and funnier.

After Eerdmans accepted the manuscript, Gayle Brown, the art director, suggested I use animal characters like the bunnies in two of my previous books. Bunnies did not feel right for this story, so I instead proposed using . . . bears! 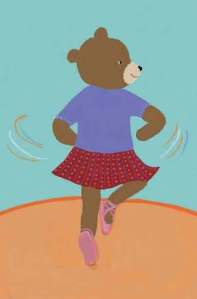 I have written and illustrated over 30 books for children, but before Peter Is Just a Baby I had never used bears as characters. I’m not sure I had ever drawn any kind of bear besides a koala bear for a class report in the sixth grade and teddy bears for my human characters to tuck into bed with them in many of my picture books.

But Gayle loved the idea, so I got down to work. The hardest part of creating Peter Is Just a Baby was figuring out how to draw my bears, keeping them simple yet expressive. It was a good challenge.

Painting the pictures for my books is always my favorite part. The dummying is done; the drawings have been carefully transferred to good paper; my tubes of gouache paint are lined up on my drawing table. Hours go by very quickly when I’m painting. It’s exciting to watch the pictures come to life.

My little bears were good companions, and when the art was complete and ready to ship, I felt sad to see them go.

I may just have to let them appear in another book! 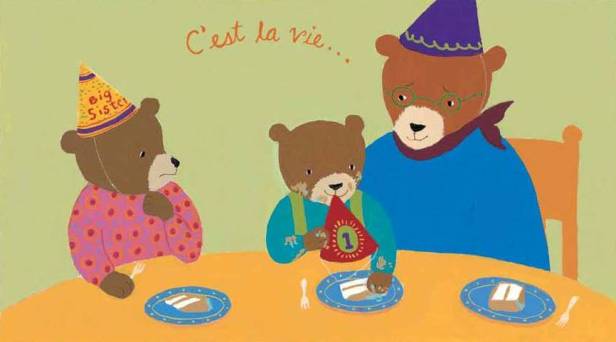 My Tweets
Join 3,294 other followers