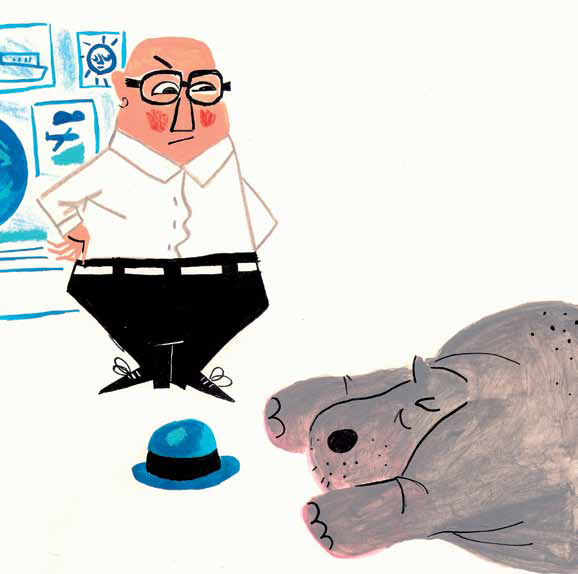 For our “Staff Picks” series, we invite members of the Eerdmans staff (affectionately known around here as “Eerdfolks”) to choose their favorite EBYR titles — old and new — and tell you about them in their own words.

I know I’ve hardly even started, but my work here is pretty much done. Second grade reader-reviewer Parker has written up such a good and comprehensive review of this book that there isn’t much left to say.

Case in point, Parker’s first line: “This book is about a talking hippopotamus named Mister H who wants to find his home.” That is, truly, all you need to get excited about this book. In one sentence — his opening sentence, no less — Parker introduces character and conflict, dressed in just enough detail and shrouded in just enough mystery that you shouldn’t need anything else. The next sentence you read should be the first sentence of the book itself.

But you’re still here. Perhaps that’s because you’ve made a mistake. Perhaps, as someone who has read a few children’s books, you’re not surprised to hear of a talking hippopotamus. You imagine Mister H must be one of many talking animals, maybe even just one of many talking hippopotamuses. You’ve taken Mister H for an average hippo. You’ve suspended your disbelief a little too easily.

That’s almost the same mistake that many of the characters make in Mister H ­— or more precisely, the adult characters, as Parker astutely points out. “The children notice that a talking hippopotamus is walking around. . . . They do think it is strange but don’t care if he is different,” he observes. “The adults,” on the other hand, “don’t even notice that he is a talking hippopotamus.”

These adults also take Mister H for something rather ordinary, too average to notice — but they don’t even get as far as recognizing he’s a hippo! As Parker notes, “They answer his questions and don’t even notice that he is not another person but an animal.”

Take the travel agency clerk, for instance. After a hapless Mister H crashes into his window, he looks up from his typing only long enough to scold him:

“Next time be more careful! You could have broken the glass into a thousand pieces,” the clerk said.

And he went back inside, as if nothing out of the ordinary had happened, and continued his typing.

For these characters, the problem is not exactly the too-easy suspension of disbelief, but the failure to have any concrete belief in the first place. To suspend disbelief fully enough to enter a new world, one first needs a solid idea of the familiar world. One needs to know what kinds of things and creatures are out there.

These characters, sadly, can’t see anything beyond themselves. Buffered by cell phones and keyboards and headphones, buried in the minutiae of trifling concerns, they never look up or look around long enough to know what kind of world they’re in. They don’t know enough about other people to distinguish people from hippos. The don’t know enough about normal to see that Mister H is strange.

Note that the children have no trouble identifying Mister H as an anomaly. Note also, as Parker does, that they “don’t care if he is different.” Surprise and delight, contrasted against the adults’ coolness and indifference — I think there’s no question about which reaction is better.

Whether you’re an adult in need of a surprise, or a child looking for a new delight, this is a good book for you. It may be, like Mister H himself, just a little bit bizarre, but also like this eponymous hippopotamus, it will reward your attention.