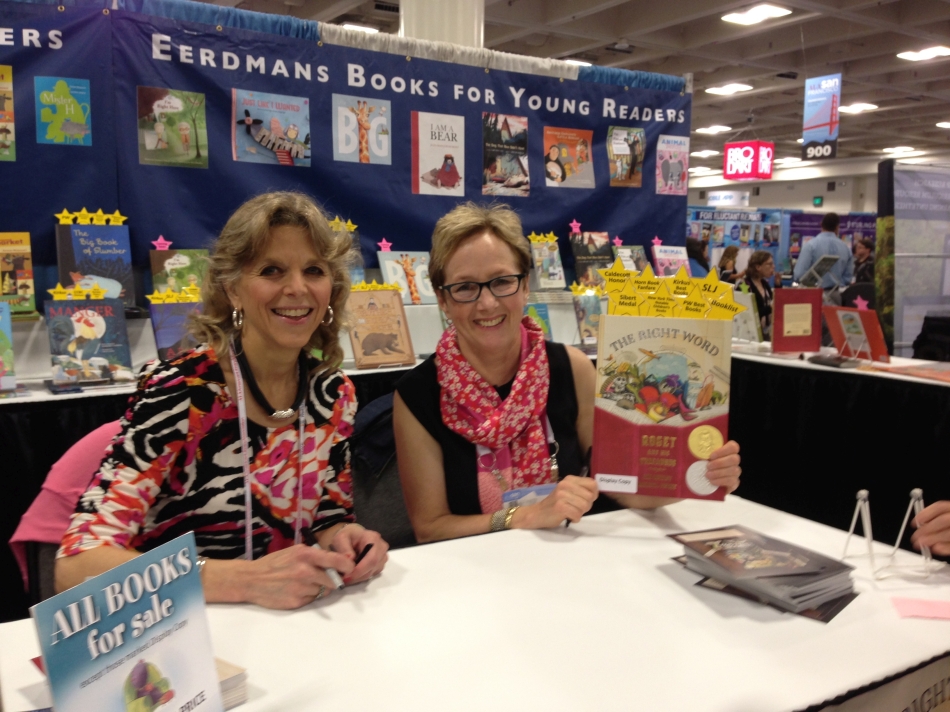 It was a busy weekend for Eerdmans at this year’s ALA Annual Conference in San Francisco. There were places to go, people to see at Booth #1109, books to share . . . and awards to accept!

With Mikis and the Donkey winning the Batchelder Award and The Right Word winning the Sibert Medal and a Caldecott Honor, there were multiple acceptance speeches from EBYR this year. We thought we’d share some highlights.

Anita Eerdmans, our president and publisher, accepted the Batchelder Award and spoke of the diversity that translated books offer American readers:

Giving children the opportunity to see things differently is indeed one of the valuable results of publishing books in translation. In Mikis and the Donkey, Mikis lives on the Greek island of Corfu — a setting that couldn’t be more different to the experience of an American child growing up in, say, Grand Rapids, Michigan. The houses, the streets, the town square where Mikis’s grandfather meets his friends for weekend conversation, all feel distinctly foreign to an American sensibility. Mikis’s grandfather gives him a DONKEY! How strange is that? Yet Mikis is a character who is eminently relatable for American kids. The camaraderie he develops with the donkey and the depth of his feeling for her will be well understood by any kid who thinks his dog understands him better than his family does; the warm hospitality Mikis feels at his grandmother’s kitchen table, which often serves as an escape from his own overly-busy parents, will not be a stretch for American children to grasp. Mikis’s school room, with its amusing cast of classmates and beloved teacher, will be easily recognizable. And so the commonalities provide a happy entry point into the differences. . . .

Jen Bryant, author of The Right Word, spoke about Peter Mark Roget’s egalitarian aims for his Thesaurus and her own affinity for Roget :

Peter Mark Roget was a unique individual whose personal writings became one of the great democratizing forces in the English language. His roles as a student, doctor, inventor, and lecturer brought him in contact with the privileged, educated upper classes as well as the poor, marginalized, undereducated ones. When he realized that the word lists he’d collected for his own use might be of value to others, he was determined that it would be a vehicle of equality . . .

When people ask: How do you choose your topics? I confess that they often choose me — that there is some immediate emotional connection between me and my subject’s personality and passions. Obviously, as writer and poet, I shared Peter’s love of words, but it went much deeper than that. His innate curiosity, his childhood shyness, his delight in the natural world; his need to record the important events and individuals in his life; his anxiety about public speaking; his dependence upon routines, rituals, and a very understanding spouse, to ground his intellectual wanderings; his fondness for people and his equally strong desire for solitude and personal space. These connected me to Roget and to the tattered Thesaurus that had stood for so long on my own writing desk. . . .

The opportunity to make this journey with my friend and brilliant illustrator Melissa Sweet is, as Peter would say, in ascending order: good, above par, leaning toward the favorable, better, mutually beneficial, excellent, crack-ajack, unparalleled, superfine, gilt-edged, first-class, exquisite, transcendent, and finally — (my word now) — perfect.

Illustrator Melissa Sweet shared about her sources of inspiration for The Right Word‘s art:

For months, I jotted down words when I walked my dog, noticed the weather, recorded the shades of green in my backyard. I realized too, I had to somehow include Roget’s original list of 1000 words — the basis for his Thesaurus. If I were a kid, I would want to know: of all the words in the world, which ones did he choose? There was no question in my mind that it had to be hand-lettered. A typeset list would look flat and static. It took the better part of two weeks to carefully write out this list in sepia ink — just as Roget had done. It was like a meditation, and I could not have enjoyed it more. In that time, I got to know Roget not only by his word choices, his “ideas,” but also by how he catalogued the world.

You can read the full remarks from Anita Eerdmans here and Jen Bryant and Melissa Sweet here.

0 comments on “Faraway Places, Perfect Endings: Acceptance Speeches from ALA”