Pope Francis, in his first visit to the United States last week, praised four “great Americans . . . [who] were able by hard work and self- sacrifice — some at the cost of their lives — to build a better future.” One of those four was Dorothy Day, founder of the Catholic Worker movement. “Her social activism,” said Pope Francis, “her passion for justice and for the cause of the oppressed, were inspired by the Gospel, her faith, and the example of the saints.”

For a great resource for learning and teaching about this great American, explore our biography of Dorothy Day by Deborah Kent, Dorothy Day: Friend to the Forgotten. The following is an excerpt from the book’s prologue.

Chairs scraped across the floor, spoons clattered against bowls, and the voices of a hundred men competed to be heard over the din. It was a typical day in the soup kitchen on New York City’s Mott Street. Outside, a cold wind whipped along the pavement. But inside the big, noisy room, there were warmth, food, and friendly faces.

Suddenly the mood shifted. A single voice, full of rage and hatred, ripped through the room. “Shut up! Shut up or I’ll kill you!”

In an instant there was a stunned silence. In the center of the room a large man with long, scraggly hair swayed drunkenly on his feet. He glared furiously around him, and the other men shrank beneath his gaze.

A tall, slender, middle-aged woman strode forward. She had been busy dishing soup into bowls, but now she saw that she was needed elsewhere. Most of the men watched her respectfully as she crossed the floor. They had known her for years. With a group of devoted helpers, she had founded this soup kitchen and shelter for the homeless where so many took refuge. Her name was Dorothy Day.

Calmly and deliberately, Dorothy approached the drunken man. “Hello,” she said, smiling. “I’m very glad you’ve come to be with us today.”

The man stared at her. His wild blue eyes seemed to bore straight through her. Dorothy sensed his madness and his rage, and she felt deeply afraid. “What are you looking at?” the man bellowed. He took a menacing step toward her.

Dorothy knew that she must be as decisive and honest as possible. “I’m looking at you,” she said immediately.

“Why are you looking at me?” the man shouted.

“Because I’m standing here talking with you,” she replied. “I’m Dorothy Day. What’s your name?”

For a moment the man glared at her in silence. “Fred,” he answered at last.

“Well, Fred,” Dorothy asked, “would you like some soup?”

Fred eyed her suspiciously. “Are you going to have some?” he wanted to know.

“I’m pretty hungry,” she said. “I think I will.” She brought a bowl of soup for each of them, and they sat together at an empty table.

Fred watched Dorothy take a few spoonfuls, but he didn’t touch the soup she had placed before him. “Let me have your bowl,” he growled.

“Sure,” Dorothy said, sliding her bowl across to him. What was wrong, she wondered. Did he think that his own soup was poisoned?

Ravenously Fred gobbled the soup from Dorothy’s bowl. Then she noticed that he was glancing at the bowl she had originally given to him. With a flash of intuition she asked, “Do you want me to have your soup?” 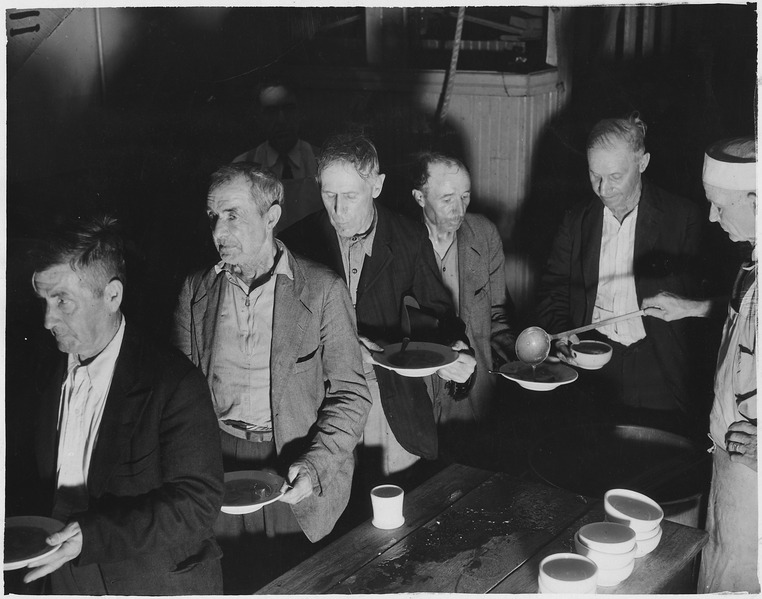 All the while the two of them ate, the other men in the room remained silent. there was no sound but the rattle of two spoons against two bowls and Fred’s ominous muttering. His fierce, smoldering anger filled everyone with dread.

Dorothy remembered a verse from the book of Romans in the Bible. “Be not overcome with evil,” it said, “but overcome evil with good.” She picked up a slice of bread, broke it, and handed half to Fred. “Thank you,” he said, and took a hungry bite.

“Well,” Dorothy said at last, “I have to go back in the kitchen and get things ready for tomorrow’s meals. I hope you’ll join us again.”

Fred did not answer, but somehow the tension began to ease. Here and there, voices rose again around the room. Soon the soup kitchen was as noisy as ever.

Early the next morning, one of her assistants told Dorothy that a large man with long, tangled hair wanted to see her. Fred waited at the door, greeting her with a shy smile. In his arms he carried a bulging bag of vegetables — celery, carrots, onions, and potatoes. “I thought you could use these,” he said gruffly. “For the soup.”

Over the years that followed, Fred became a regular guest at the soup kitchen. Dorothy Day often described their first encounter when she spoke about her life’s work. In her meeting with Fred, she had managed to put the principle of Christian love into action. As the Bible counseled, she had overcome evil with good.

Click to order Dorothy Day: Friend to the Forgotten by Deborah Kent.