It’s Katherine, writing from the dungeons of Edinburgh Castle, which feels appropriate since Halloween is right around the corner. (Halloween is a spy’s favorite holiday. We’re in disguise 365 days a year, but on Halloween at least we’re rewarded with candy.)

Maybe it’s being in a haunted underground chamber with centuries of history, or maybe it’s because our vintage-looking book The Dog That Nino Didn’t Have just came out, but for whatever reason, I’ve been feeling nostalgic lately — so much so that Ahna and I decided to sit down and talk about books that make us nostalgic.

I started to wonder if other people felt the same nostalgia for children’s books that Ahna and I do, so I decided to do some research. As it turns out, lots of people at headquarters remember their favorite childhood reads. (They also have some pretty awesome photos of their past missions, but obviously I can’t post any of those here. Most of them didn’t even officially happen.) What follows are testimonials of industry professionals regarding the books that helped them to cultivate a love of reading.

“Horton Hatches the Egg, by Dr. Seuss. My dad would read this one to me, and I’m pretty sure we both about had it memorized. Yertle the Turtle comes a close second.”
— Kathleen Merz, EBYR Managing Editor 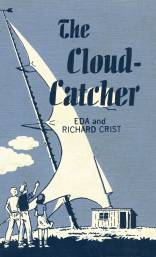 “I used to read The Cloud Catcher over and over as a child, going to the Austin Public Library on the west side of Chicago. I was always grateful it was on the shelf, waiting for me.

“It’s a fun story of two friends, Sherwood and Beany, who invent a cloud catcher, a canvas sail built on a hill that snares the clouds which they then trap in bottles. Gretta, whose father sells balloons in town, stops in to say hi and she joins them. Soon there are cloud-filled balloons and then cloud-filled mattresses.

“I think what I found really pleasing about the story was the collaboration between these friends and the palpable excitement of their project. I felt as if I were in Cranberry Ridge too, tagging along, far from the west side of Chicago.”
— Jim Chiampas, Graphic Designer

“One of my childhood favorites is Come Over To My House, by Theo LeSieg, where invitations abound to visit children around the world and see where and how they live: from city dwellings and adobe homes to houses along the water in Venice. Looking back now, it’s full of stereotypes — and yet it introduced me to a sense of people, cultures, travel. I still own that book — a wonderfully beat-up, battered copy from multiple readings. It opened worlds, windows, wonder.”
— Lil Copan, Senior Acquisitions Editor

“One favorite was Goodnight Moon by Margaret Wise Brown. I liked the detailed illustrations and the rhyming sentences.  We’d look for more things to say “goodnight” to . . . even better if we could make it rhyme! I also have a favorite EBYR book (didn’t realize it until I started working here!): Mommy, May I Hug the Fishes? by Crystal Bowman.”
— Mollie Von Ehr, Promotions Coordinator

“I’ve got two ‘antique’ picture books that I’m fond of. I think they say a lot about how reading instruction (and book marketing) has changed over the years.

“The first book is a reading primer, Fun with Dick and Jane. This book is even older than I am, but I’m fond of it because my first publishing jobs were with Scott, Foresman, which published the Dick and Jane readers for many, many years. Today, the books represent to me all that was wrong about reading instruction in the mid-20th century: see-and-say, rote memorization, and illustrations that reinforced the white, middle-class, 2.5 kids, suburban house with a picket fence, working dad, stay-at-home mom stereotypes that Baby Boomers grew up with.

“The other book is still a favorite of mine. It’s the Little Golden Book edition of Clement C. Moore’s poem ‘The Night Before Christmas.’ The poem is a classic from 1822, and this edition’s art by Corinne Malvern evokes the nostalgia of Christmas in 19th-century England. There is absolutely nothing about the ‘true’ meaning of Christmas in the poem or the illustrations, but it still gives me a warm, cozy feeling every time I read it. And Little Golden Books (published by Simon & Schuster, another company I worked for, briefly) were a huge marketing coup in the mid-20th century. They were affordable, colorful, and great read-along books.”
— Linda Bieze, Senior Project Manager

“Of the books I remember growing up, the one that I am certain I nearly drove my mother and grandmother crazy reading/re-reading, was Stop That Ball.  I can still see the illustrations in my head and remember some of the lines. It is still in print. The reason it makes me nostalgic is that now my mother is aging and my grandmother passed away several years ago, and I have fond memories of listening to both of them read this book.”
— Britt Dennison, Manager of Editorial Operations

“Two books evoke happy nostalgia in me like no others: Shirley Hughes’s Dogger and Gyo Fujikawa’s Oh, What a Busy Day!

“Hughes captures the happy chaos of family life better than any author/illustrator I’ve ever known, and the subject of this book — a beloved snuggle buddy named Dogger who gets lost and found — was perfectly suited to my Blankie-obsessed childhood heart. It wasn’t until I was all grown up that I first noticed that Hughes had cleverly inserted a dalek (of all things!) into her fancy dress parade — and after that, of course, I loved it all the more.

“Fujikawa’s seemingly random assortment of sing-song verses, epic spreads, and fun lists (oh, the lists!) — all intricately and adorably illustrated — is embedded deeply in my consciousness and continues to shape my idea of the perfect day. Even though it’s pretty long for a picture book, I’ve had most of it committed to memory since I was a very young child.”
— Rachel Bomberger, Director of Marketing

“The Little Golden Books always warm my heart because my grandmother had a handful of them, and we grandkids were always reading them every time we would visit.”
— Kathy Best, Royalty Accounting

“One picture book that makes me feel nostalgic is Can’t You Sleep, Little Bear?, written by Martin Waddell and illustrated by Barbara Firth. It was a frequent request of mine for bedtime reading with my mom when I was little. I identified with the little bear who didn’t want to go to sleep and let its poor parent have some well-deserved rest (the bear in the book was legitimately scared of the dark, but I think I just usually wasn’t ready to let the day end), and the big bear was always patient with the interruptions to its reading. The illustrations made the bears and their world look very appealing, and the book gave me a feeling of coziness and safety that I loved.”
— Holly Hoover, Editorial Associate 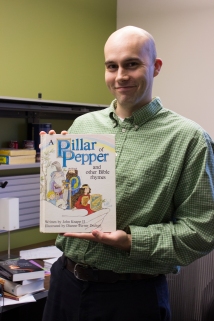 “I remember having A Pillar of Pepper by John Knapp II read to me often when I was little, helping kindle a passion for the Bible that is yet to die out. It’s a collection of nearly one hundred poems on biblical topics, all illustrated beautifully. Many individual poems (and lines from poems) have stayed with me over the years. I also love that many of the poems draw their inspiration from less-celebrated biblical stories; I suspect this has fueled my penchant for journeying to some of the more infrequently traveled areas of Scripture in my own study.

“I have a personal connection to the book in that it was written by my father. In fact, the book went to press just a few days after I was born, after being delayed for the event: the printer had two versions of the dedication page, one with ‘Andrew’ and one with ‘Sarah’ (alongside my older siblings). Once I arrived on the scene and they knew which to move forward with, the book came out.”
— Andrew Knapp, Project Editor

It’s nice to think about the fact that we all share this warm nostalgia for children’s literature. Our tastes in books might be different, but we all have been moved and changed by stories, and the stories we love never really leave us.

Now, if you’ll excuse me, these ghosts aren’t going to hunt themselves.

(What, a girl can’t have hobbies?)

This monthly column is where EBYR editorial assistant/vlogger/superspy Katherine Gibson divulges extra information from Coffee Break with EBYR that would otherwise be kept off the record. She’s researching topics related to children’s literature, posting her findings — and taking down some powerful militarized governments in the process. Just kidding about that last one. (Or are we?)