When was the last time you encountered a fairy tale or folk story that didn’t involve princesses?

Let’s face it: the general Disneyfication of the world’s folklore means that nearly every fairy story these day is (or is at least eligible to become) a princess story.

My two younger daughters love this. They’d wear purple lace and rhinestone tiaras every day if I let them. My oldest daughter — who is now much more into dragons than damsels — finds it mildly annoying.

My son, however, doesn’t quite know what to do with all those princesses. He loves reading and can spend hours poring over a book of Greek or Norse mythology. Thanks to Disneyfication, however, I struggle to get him interested in folk tales and fairy stories. He seems to be under the impression that they’re for girls.

This is one reason why I was so excited to introduce him to Shobha Viswanath and Dileep Joshi’s picture book The Blue Jackal.

In this folktale from India (and when was the last time you read a traditional story from India that didn’t pass through Rudyard Kipling first?), a jackal named Juno just can’t catch a break. He’s bullied and teased by the other jackals and chased by a pack of village dogs — until he finds himself, wet and frightened, hiding out overnight in a vat of indigo dye.

Emerging the next morning a royal blue color, the other animals in the jungle don’t recognize him for what he is — they see only his cerulean coat — and they make him their king.

Juno lords it over his animal subjects happily (and also, somewhat cruelly) for a time, until, one silvery night, he can’t help showing his true colors. He howls at the moon, gives himself away, and is promptly deposed.

Even long after, however, the memory of his short reign stays with him:

No matter what troubles
his life might now bring,
he never forgot
that he once was a king.

There’s so much going on in this little story — and so much to think about when it’s over. Is poor, bullied Juno the hero or the villain for snatching opportunity when he finds it and becoming (temporarily, at least) a vengeful, self-serving tyrant? Is Juno better or worse off for having had this adventure when all is said and done? What does this fable tell us about human nature, politics, economic disparity, social status, prejudice, and the role that dumb luck plays in determining our various lots in life?

I love the questions it raises. I love its cultural authenticity. I really love its Warli-inspired art. But what I may like best about it, though, is that there are no princesses.

My son seemed to appreciate this about it, too. A few days after I brought the book home, he was assigned to imagine and draw a new constellation on a map of the starry sky for school.

His constellation? The Blue Jackal. I loved it. 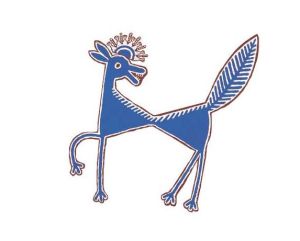 About Rachel in Review:

Life for this kid lit enthusiast and working mother of four can be messy. Confusing. Painful. Funny. Breathtakingly beautiful.

Enter the Eerdmans books. So, so many of our books, whether they’re bedtime books for babies or coming-of-age novels for young adults, seem to have a single uncannily common quality about them: they just fit. These wise, wonderful books somehow manage to tie into — and by so doing, help me sort out — the knotty complexities of life as I actually experience them.