From Brain to Book posts invite authors and illustrators to sketch the development of an idea or illustration from their book, revealing how it went from the first inkling to the final draft.

Reading The Golden Key close to forty years ago instilled in me a profound desire to someday create pictures that illuminated this evocative text. Over the years, when people have asked, “If there was one book you’d like to illustrate, what would it be?” my answer has always been The Golden Key. I loved the story, and the version I had was illustrated by Maurice Sendak with beautiful, dream-like pen and ink pictures. There were only six plates in the book, however, and I wanted to do a fully-illustrated version.

After I became a working author/illustrator I tried to edit down the story to fit a picture book format, but it didn’t feel right. The story is simply too long and complex for a picture book. So my “dream project” was put on the shelf for thirty years.

In 2007, with Brian Selznick’s Invention of Hugo Cabret, I became aware that artists were challenging the standard format of books for children. A few years later when thinking wistfully about how The Golden Key could absolutely never be made into a picture book in this climate of shorter and shorter texts, it occurred to me that this very long story might be easily broken into chapters, as it alternates between the two characters’ points of view. I also felt that 8-12, rather than a younger picture book audience, was a more suitable age group for this unusual story. Thinking “outside the box,” I now imagined the story as a chapter book.

In contemplating the style and medium to use, I decided that scratchboard would be perfect to convey the story’s mythic quality and dramatic light and dark imagery. In 2011, in my spare time between other book projects, I began to create some of the key scenes that I wanted to include in the story. My favorite scene is Tangle descending the stairway into the earth, and I always imagined this scene was perhaps inspired by the myth of Persephone descending into Hades.

I split the story into nine chapters and created a dummy that came out to around 224 pages, carefully planning room for over 45 illustrations. Some pages are wordless spreads, some are all text, and some have vignettes that wrap around the text. I wanted to create the look of a fully illustrated novel. It is really a very long picture book for an older audience. Why not?

Eerdmans was the perfect choice to approach as a potential publisher, as there are already many George MacDonald titles in their catalog. I was thrilled to work with the team there; they are dedicated to producing the finest quality books possible, and they spent a great deal of extra time on the complex layout of the book.

One thing I hope will set my version apart is the fact that, as a picture book illustrator, I decided to add elements that were not expressly stated in the text, that would “expand” the story and add an interesting subtext. This subtext was created as I mused on the object and meaning of the golden key itself and the fact that MacDonald places the key in Fairyland. I have framed the story with wordless pictures, one before the text of the story starts and one right after it ends. I have always been intrigued by the fact that the golden key seems to magically appear at the base of a rainbow in Fairyland. I imagined that perhaps a fairy might be put in charge of placing it there. And perhaps that fairy might arrange for a particular person to see the rainbow and seek the key. Or perhaps in “flitting from place to place” lest anyone should find the key, she notices a boy with a spark of desire for something beyond our normal human grasp.

Therefore, in the first illustration, before the text begins, the creatures in Fairyland watch the boy as he listens to his great aunt’s stories. One fairy is sitting on a tree stump with the golden key. I imagined her observing his spark of interest in the key. 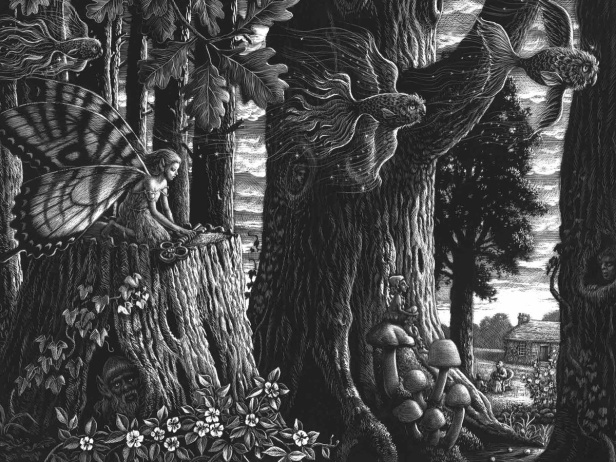 After showing a close-up of this conversation between Mossy and his great aunt at the start of the text, I added another wordless spread with the fairy flying off with the key, implying that she was going to hide it for the boy to find. 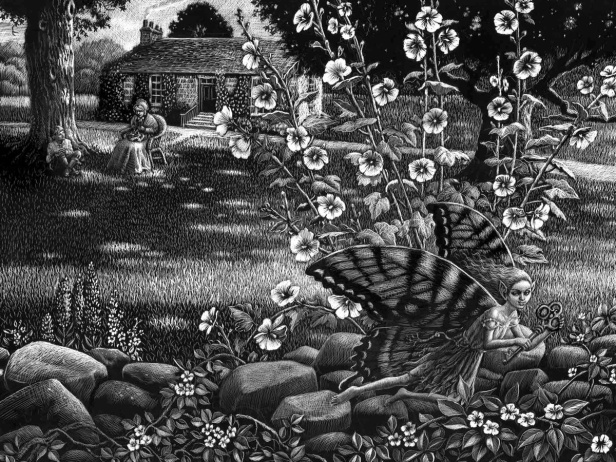 And sure enough, he could not resist dashing into Fairyland that evening when he sees the rainbow, a “grand sight, burning away there in silence, with its gorgeous, its lovely, its delicate colors, each distinct, all combining.”

At the end of the story, in the picture where Mossy and Tangle climb into the rainbow in the distance, the fairy flies off with the key in the foreground, indicating that their story is over, but another story is about to begin. The final wordless illustration shows the fairy bringing the key back to the base of the rainbow in the forest, looking back toward the reader—an invitation for the next person to seek the key.

George MacDonald considered Fairyland to be a symbol of the imagination, and he invited each reader to interpret his stories after his or her own sensibilities. I invite readers to interpret my pictures in the same light. For me, imagination is the Golden Key.