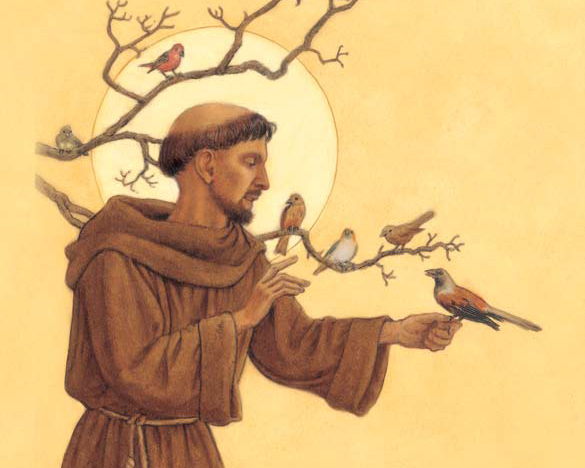 Usually, when we think about saints we think about great people who do really nice things for other people. But St. Francis was a little different. While he was distinguished by his commitment to poverty and preaching the gospel to the least fortunate, history extolls him for his unusually profound love for animals.

With lilting verse and playful imagery, award-winning author Pat Mora celebrates the tender relationship between the beloved saint and the animals he loved in The Song of Francis and the Animals.

Woodcut artist David Frampton captures the exuberant songs of Francis and the animals in charming, colorful woodcuts that underscore the harmony between humans and the natural world.

Inspired by Saint Francis’s own reverence and love for animals, this book will encourage readers young and old to join in with the clucks of the chickens, the whirring of the cicadas, and the songs of the nightingale.

Publishers Weekly
“Pat Mora praises in poetry Saint Francis’ calming way of communing with creatures great and small in this celebratory picture book, made all the more joyous by Frampton’s handsome colored woodcuts.”

Kirkus Reviews
“Strikingly beautiful woodcuts and an oversized format create a first-rate visual accompaniment to this imaginative story about St. Francis of Assisi. The lyrical text focuses on St. Francis’s affinity with animals and describes him simply as a man who preached and sang with ‘people and dogs and flowers and fish and frogs.’ . . . This treatment serves well as an introduction to the saint who lived in an down-to-earth fashion.”

0 comments on “The Feast of St. Francis of Assisi”