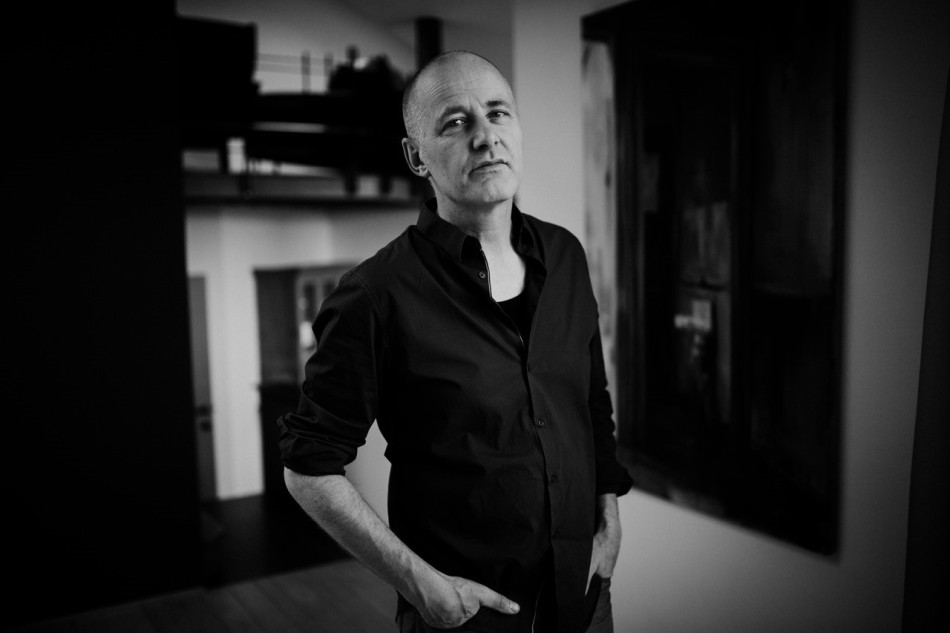 Jan De Kinder is a children’s author and illustrator whose books have been translated into a number of languages. He lives in Belgium, and his favorite color is red, in all its possible shades.

What made you decide to become an author and illustrator?

As a child, I was rather shy. I grew up on a farm, a bit isolated. I had a lot of imagination, and I loved to read books. Books were my view on the outside world.

I was also bullied at the age of twelve. Drawing became my way to find a voice without words. To get lost into my imagination and to create my own world. I think these are the reasons I made a profession of it.

I start to work between 7 and 8 a.m. For about an hour I try to write, to develop stories in my diary/sketchbook. At 8, I have breakfast. From around 9 to 1, I work mostly on illustrations. In the afternoon, from 2 to 5 I work on different things such as administration, social media, more writing, and starting up new projects.

Sometimes throughout the year I go to schools and libraries. There I talk about my books, or I give workshops for children. From time to time I act and draw for the theater company HETGEVOLG in Belgium.

Where do the ideas for your illustrations come from?

Most of the ideas start in my sketchbook/diary. I try to observe and draw from nature, people, animals, and things as much as possible. Intensive model drawing is also a part of that.

Do you have any advice for would-be authors illustrators?

My advice is to try to draw as many things as possible from daily life. Life drawing is so important. The second thing is to keep a diary/sketchbook and work in it every day for at least half an hour without giving yourself limitations. That’s the place to find your own voice. And in my opinion, that’s the most important thing.

What characteristics do illustrators need most?

Stay true to your own voice. What’s the story you want to tell? Why is a story your story? Even if you illustrate someone else’s story, you have to draw it as if it is your story. That makes the book better.

Vulnerability in the way you make your story is the key to finding a connection between you, your story, and the audience. It’s very important to me to go back to my memories as a child. This gives me a starting point to create stories.

Can you tell us one thing people may not know about you?

In high school I studied horticulture and bricklaying (to build houses). During that time, I decided to go in an artistic direction. We started a school newspaper with a few friends, and I discovered the pleasure of writing and illustrating.

Also, as I said before, I didn’t have a voice because I was so shy. I decided to create my own language with written words and drawings.

I’m passionate about storytelling, and a few years ago I did street performances with a friend.

What is your favorite thing about being an author?

The freedom to try to develop my stories. To find words for the characters I imagine.

It is great when a reader or an audience feels touched by one of my stories.

What is your favorite thing about being an illustrator?

The complete freedom to draw whatever I like, to use my imagination and the possibility to observe people, nature, and things while I’m doing life drawing.

What do you do to shake the rust off or get new ideas?

Life drawing and working in my sketchbook/diary.

Having a coffee somewhere in a pub and observing people or working together there with some friends.

I also like to go to the theatre and to contemporary circus festivals.

What has been the highlight of your career thus far?

The way the book Red, which was a very personal project, was received. It’s been used for campaigns against bullying in schools worldwide. So that book might have made a difference to some of the victims of bullying, by making it easier to talk about bullying.

Red has also become a play, and to act in that play was a highlight for me personally.

What is something you wish someone had told you when you first started writing and illustrating?

Have patience in finding your own voice. Think from a long-term perspective. You don’t have to be a one-hit wonder if you want to touch people with your work.

Tell us about Red? What inspired you to write this book?

When I was a child, I was a victim of bullying because of blushing. For me it was a very symbolic color with which to tell and illustrate the story.

That part of the story is autobiographical. One of the main characters in this book, the boy who almost didn’t speak the whole story, that was my story. At first, I wanted to make a story for the victims of bullying, since that had been me. But after different versions and after a talk with my publisher, I decided to rewrite the story form another perspective. What I felt as a child, I put that in the drawings. And the moment I decided to use the voice of an outsider, to let her teIl the story, things began falling into place.

What’s up next for you?

I was inspired to write this comical and imaginative story when my then-five-year-old daughter Emma wanted to kiss a friend.

The story is about Rosalie, who wants to be kissed by Jeff. But Jeff is a knight, and true knights don’t kiss. But they do, Rosalie insists. They kiss their princesses, don’t they? But Jeff is a knight on horseback. They’re too high up to kiss. So he ends up quickly running away from Rosalie.

Currently, because of corona-times, all my lectures and workshops for children are canceled, so I have time to work on new stories. A few of them are approved/confirmed by the publisher, so I just have to work them out.

A moving and realistic story about bullying

In this poignant story, a girl finds it funny when her classmate starts blushing on the school playground. Her friends laugh along with her, but one student takes the teasing too far. Torn between her sympathy for her classmate and her fear of the bully, the girl must make a difficult choice.

This heartfelt book will inspire readers to find the courage to take a stance against bullying and show compassion towards others.

“From the proliferation of red throughout this book, we know visually it has strong emotional content, and the cover, with a dispirited boy being gawked at by others, adds to its impact. . . . While the text is sparse (and in red), as the teasing builds to a crescendo, the distinctive pencil, charcoal, ink, acrylic, and collage art dramatically shows events spin out of control. . . . [A] thoughtful, accessible story.” — Booklist (STARRED review)
“A useful opening into discussions about taking a stand when others do wrong.” — Publishers Weekly
“The beguiling artwork and pulsing heart at the story’s center provide much food-for-thought — not to mention an opportunity for children to put themselves into the shoes of the bystander of a cruel act, which surely happens on playgrounds more than adults would care to admit. Thoughtful and beautifully illustrated, it’s definitely one to look for.” — Kirkus Reviews
“An elegant story about the bravery of everyday life on the playground.” — Children’s Illustration (blog)
“Red will be validating for young readers in early elementary school. It would make a fine classroom read aloud. . . . De Kinder’s illustrations are simply gorgeous.” — Jen Robinson’s Book Page
“This story brings all-too-familiar situations to young readers and opens spaces for important conversations.” — Children’s Literature