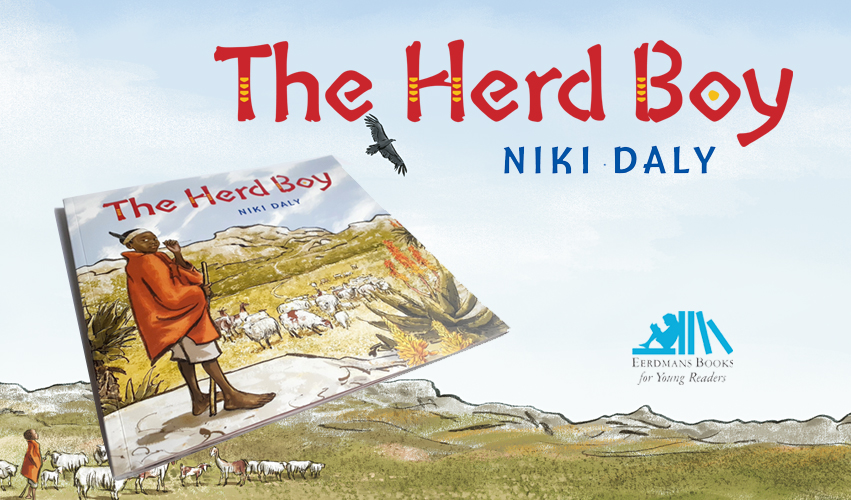 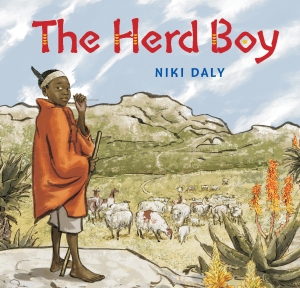 Malusi is a herd boy, which means that he must look after his grandfather’s sheep and goats and protect them from harm on the grazing slopes. This is a big job for a small boy and one Malusi does well. Still, he dreams of being more than a herd boy: he wants to be president!

When Malusi mentions these hopes, his friend Lungisa laughs and laughs. But after an attack by a hungry baboon and an encounter with Nelson Mandela, Malusi wonders if his dream isn’t so impossible after all… 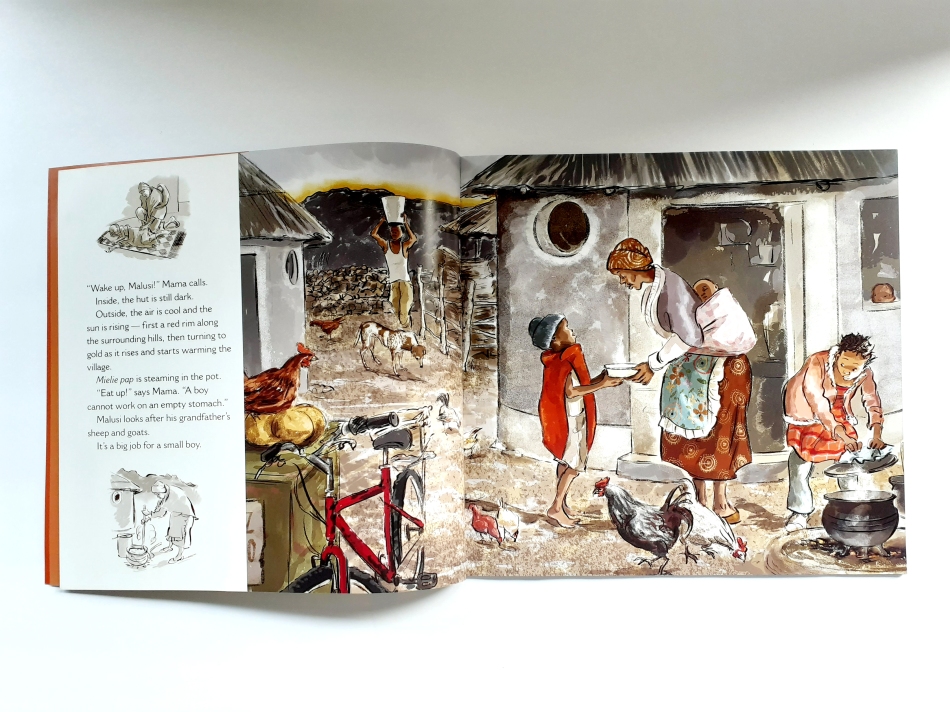 “Wake up, Malusi!” Mama calls.
Inside, the hut is still dark.
Outside, the air is cool and the sun is rising — first a red rim along
the surrounding hills, then turning to gold as it rises and starts warming the village.
Mielie pap is steaming in the pot.
“Eat up!” says Mama. “A boy cannot work on an empty stomach.”
Malusi looks after his grandfather’s sheep and goats.
It’s a big job for a small boy.

“Pweew! Pweew!” Malusi’s shrill whistling drives the sheep out of Grandfather’s kraal.
By the time they reach the grazing slopes, the earth is hot beneath his bare feet.
Malusi shields his eyes against the sun’s glare and looks up. There he spots a black eagle flying in wide circles high in the sky.
He places his feet carefully as he moves through the bush where puff adders doze, coiled up and unseen.
He keeps the sheep and goats from straying towards the deep donga, which is easy to fall into
but hard to climb out of.
You have to be awake, and you have to be brave, to be a herd boy.

A Note from the Author

Many great men come from humble beginnings. One such was the boy David, of the Old Testament, who looked after his father’s flocks and later rose to become a king. Muhammad, too, spent part of his boyhood tending his family’s herd, in all weather and amid dangers.
A great and much-loved man of our own time, late President Nelson Rolihlahla Mandela, also came from a humble, rural background. Just who could have predicted that a herd boy from the village of Qunu in the Transkei would one day become a great world leader?
Though our childhoods may appear accidental — some luckier than others — they so often seem custom-made for the adults we become. So I ask, “What is there in the life of a herd boy that would help prepare him to become the shepherd of a nation?”

NIKI DALY has written and illustrated a number of award-winning
picture books, including Why the Sun and the Moon Live in the Sky (HarperCollins), Pretty Salma (Clarion), and Jamela’s Dress (Frances Lincoln). Niki lives in Cape Town, South Africa. Follow him on Twitter
@DalyNiki.