Step into any department store for more than about two minutes this month and you’re guaranteed to hear a song about “jolly old St. Nicholas.” Now, whether or not you expect a certain portly “dear old man” to be scooting down your chimney this Christmas, you should know that chimneys weren’t really the original St. Nick’s style. He preferred windows.

Yes, there once truly was a dear old man named Nicholas who really did come bearing gifts. He was Nicholas, bishop of Myra, and you and your family can learn about his story in The Legend of Saint Nicholas, written by Anselm Grün and illustrated by Giuliano Ferri.

Nicholas’s now legendary gift-giving spree began when, as a young priest, he heard about a man who had three daughters.

This man was from a noble family, but he was very, very poor. The man had become so desperate that he was going to sell his three daughters as slaves, so that he could feed the rest of the family.

Nicholas could not allow that to happen! So he took a bag of gold and went in secret to the man’s house at night. He tossed the bag through a window.

A few years later, the Bishop of Myra died.

The bishops from the surrounding towns came together with the priests to choose a new bishop. But they could not agree. God spoke in a dream to one of the bishops, saying, “Early tomorrow morning before the service, stand watch at the church door. The first man who enters the church should become your new bishop.” 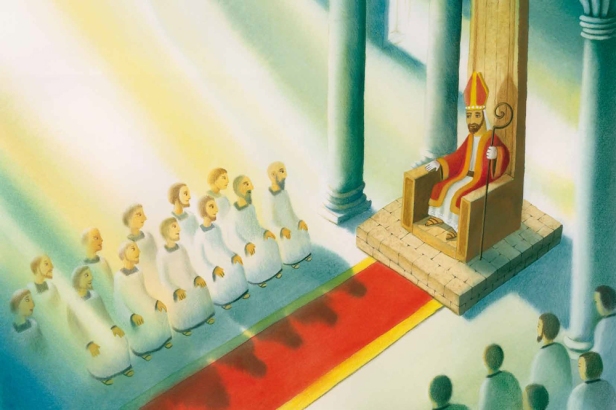 The bishop did as God had commanded. As he watched at the door the next morning, Nicholas entered. The bishops and priests took him and placed him on the bishop’s throne.

Nicholas had a long ministry as the bishop of Myra, and many miracles are attributed to him. Because he was such a good friend to children, especially those who were in need, young people in some countries still receive gifts on his feast day, December 6.

On the evening of December 5, they leave their shoes or a plate by the door and hope that Saint Nicholas will leave something for them. 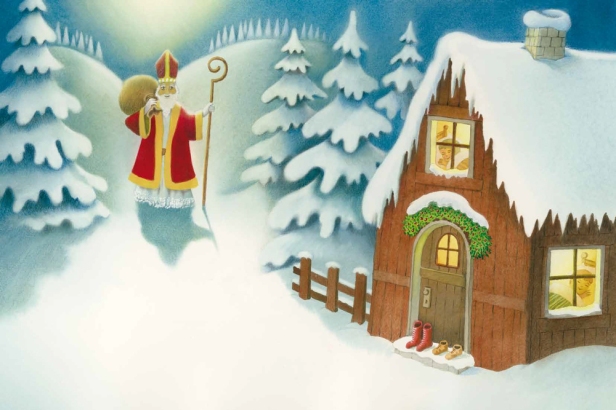