I’ve written before about why we at Eerdmans get so excited about publishing books in translation. It’s an exciting opportunity to bring a little piece of a broader world to readers in the US, to encourage readers to stretch their boundaries. Publishing books in translation also offers an interesting challenge, though. There are all the issues that can typically make publishing books for children tricky, of course. But in addition, there are issues and concerns that are specific to working with a text that has been translated from another language and another culture.

Often the names of characters in international books can sound very, well…foreign—or at least potentially unfamiliar to US readers. We actually want to preserve this as much as we can—again, one of the goals of publishing international books is to introduce readers to a world and characters that might not be familiar to them. We do want to make sure, however, that we help the reader with pronunciation as much as possible, and that we avoid names that might create too much confusion. For instance, in Soldier Bear we decided to use the anglicized version of the bear’s name (“Voytek”) rather than the original “Wojtek.” Johannes Jensen became John Jensen. But more often than not, we leave the names as they are in the original book—Samira and Frida, Nino and Mikis and Garmann.

Did you know that sounds need to be translated too? Every language has its own rules for onomatopoeia. Editors and translators who work on children’s books often have to spend a good amount of time pondering how to convey sounds into a different language.

In this spread from Roger Is Reading a Book, you can see how the text that eventually became “KNOCK KNOCK” in our edition read in the original Dutch.

And in this spread from The Geese March in Step, all of the French animal noises and sound effects needed to be translated into words that would make sense to a reader in English. 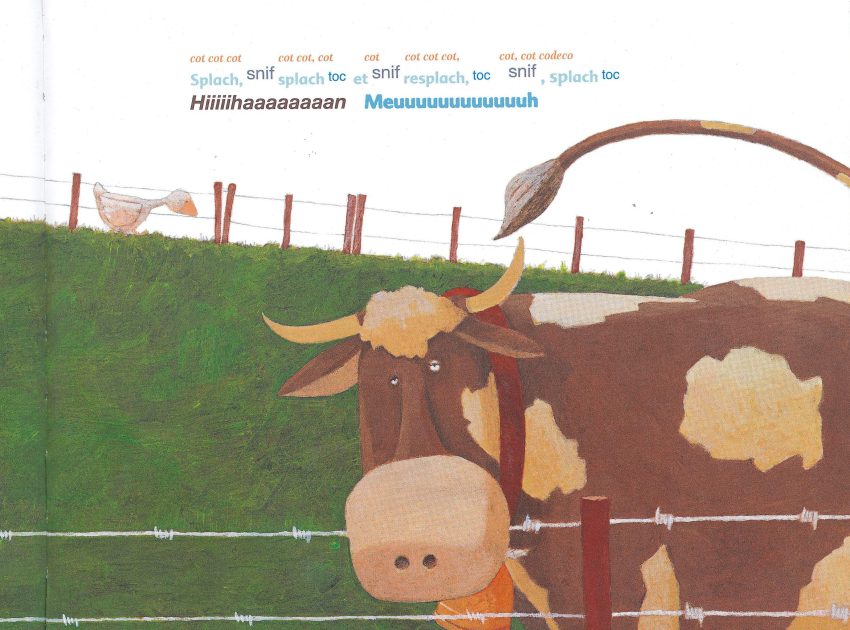 Of course, it’s not just the translated words that need to make sense for a US audience—we also have to make sure the ideas and the details will make sense. Often there will be cultural details that US readers will not necessarily have the background or context to understand.

For instance, at the end of John Jensen Feels Different, our crocodile hero celebrates Constitution Day, one of Norway’s national holidays. The original book just mentioned the holiday, but we assumed that most children in the US would be unfamiliar with Norwegian holidays, and added a little more context to help them out.

Our book Night Guard includes a poem that mentions Henrik Ibsen, Queen Maud, and Roald Amundsen—a famous Norwegian playwright, monarch, and explorer, respectively. The translator suggested that we might substitute some other famous figures who would be more familiar to a US audience. Ultimately, though, we decided to stick more closely to the Norwegian original and, as they did, include a brief footnote to explain the references.

Translation is tricky work. You want to end up with a book that is faithful to the original but also lyrical and fresh and able to stand on its own. Translating books requires immense skill with language and a good deal of creativity—there’s no substitute for the writing skill that a good translator brings to a project. Two different translators working on the same book can produce two wonderful translations that—while still remaining faithful to the original—can nevertheless vary wildly from each other. For a bit of fun, I’ll leave you with an example of that: two different translations the first stanza of “The Robbers and the Moon” by Dutch poet Annie Schmidt. The first is from David Colmer in A Pond Full of Ink, and the second is from Henrietta ten Harmsel in Pink Lemonade (both published by Eerdmans, though Pink Lemonade is now long out of print).

There were three greedy robbers who had made a cave their base.
It wasn’t fun to live there, it was more a storage place,
with boxes full of diamonds and with cases full of gold,
with silver, rugs, and tapestries—though they were flecked with mold.
Those robbers weren’t contented, no their lives were not ideal.
They longed to go out robbing, but there was nothing left to steal.
They scratched their heads and racked their brains, “Ain’t there nothing we forgot?”
But when they looked around them they could see they’d robbed the lot.

Far, far away in Italy three robbers had a den;
It wasn’t very pleasant—they were really horrid men!
Their den was far too crowded, it was filled with all their loot;
Their silver and their diamonds and four tons of gold to boot.
They sat among their treasures saying “This is quite a deal!
We want to go out robbing, but we don’t know what to steal.”
They thought of all the fancy things, the elegant, the pretty,
But they had stolen every-every-everything already.

Kathleen Merz is managing editor for Eerdmans Books for Young Readers. Read her From the Editor’s Desk column—packed with editorial insight and behind-the-scenes info on Eerdmans books—one Thursday a month here on Eerdlings.

0 comments on “From the Editor’s Desk: Editing Books in Translation”