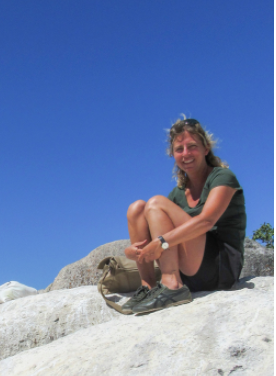 Joukje Akveld (who doesn’t want you to bother with trying to pronounce her name) grew up in the province of South Holland, a section of the Netherlands that stretches along the North Atlantic. When she turned 18, Joukje matriculated at the University of Utrecht to study Dutch and began working part-time in a children’s bookstore.

After graduation Joukje began working in publishing and eventually moved to Amsterdam, where she realized her own desire to become an author.

Her first job as a writer came at the children’s magazine Kidsweek. Later, as a freelance journalist, her work appeared in numerous Dutch publications, including Vrij Nederland, Trouw, Het Parool, and Lezen.

But all along Joukje wanted to write children’s books, a dream she realized with the publication of Olle was Sure He Did Not Need Glasses in 2010. In 2016 Joukje won the Silver Slate Pencil Award for A Monkey in the Bathroom: A Zoo in Wartime.

Her most recent book, Get on Your Bike, is an inviting book about resolving conflicts. Featuring panoramic art, Get on Your Bike is a sensitive but realistic portrayal of effective conflict resolution between the best of friends.

When Bobby and William, who co-own a bike shop, have a heated argument, Bobby takes a ride around town and through the country before returning to seek forgiveness—and discovers he’s not the only one who wants to apologize.

Purchase Get on Your Bike at Eerdmans.com, Amazon, or your local independent bookstore.